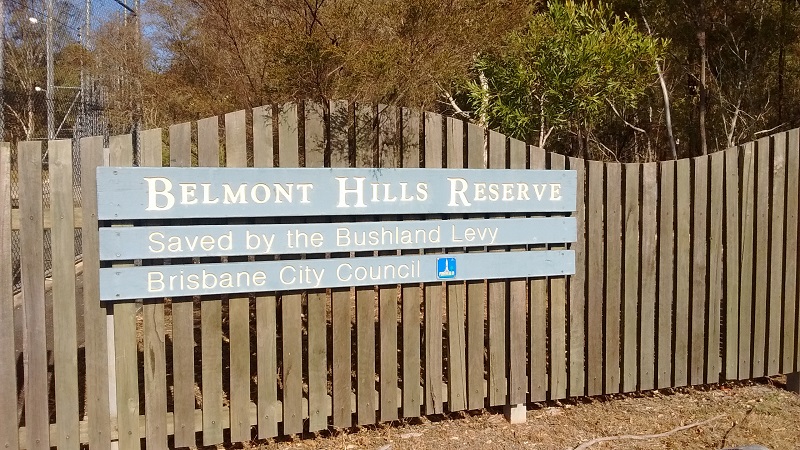 A well kept secret nestled between the Gateway Motorway and Carindale shopping centre, Belmont Hills Reserve is the result of local residents petitioning the council to reclaim green spaces.

Walking Distance: Around 5km of unique tracks – some tracks may be used multiple times

Difficulty: Moderate – due to the hills

Costs/Permit: No cost, no permit required

Belmont Hills Reserve is such a well kept secret that it doesn’t even show up as a green space on Google Maps – unless you are scrolled out enough that it shows up as pale green. So you are excused if, like me, you never knew it existed. I’m so thankful that a friend let me in on the secret.

There are about 5km of intertwining tracks in the reserve. Most of the tracks are wide enough for a vehicle, however some are only suitable for single file use. The signage within the reserve could definitely benefit from improvements. If it was any larger getting lost would be a concern.

Belmont Hills Reserve has ‘hills’ in its title for good reason. While there is plenty of flat areas, there is also plenty of hills to get your heart rate elevated and your muscles burning. Proceed with caution down the hills as the surfaces have loose gravel. Shoes with good grip are advised. Keep a look out for wildlfe as wallabys frequent the hills and can often be seen bounding through the bush.

There are many different types of native bush within the reserve. The white trunks of the ghost gums stood out against the darker trunks of the majority of the gum trees. Some of the tracks run parallel to the Gateway Motorway and there is no ignoring the traffic noise. However, walk a few hundred meters more and you’re on the other side of a hill and nothing but birds and bush noises can be heard.